A Thread of Blue: Leaning on My Faith 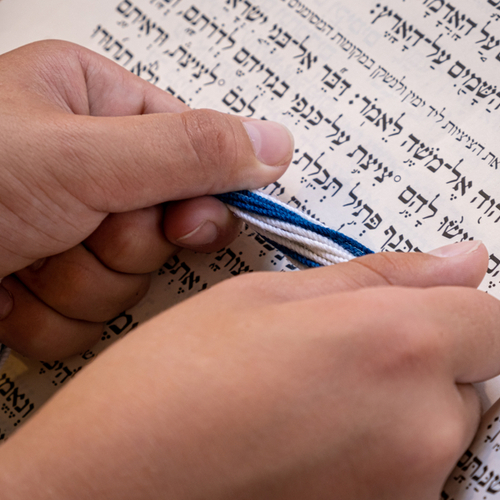 How Faith Got Me Through Difficult Days

The Siddur, the term for a Jewish prayer book, contains a set order of daily prayers. My familiarity comes from spending years attending morning services in memory of both my husband and father. One passage references the tzitzit, specially knotted ritual fringes, or tassels, attached to the four corners of the tallit, prayer shawl worn by religious Jews. And one fringe contains a thread of blue.

There are differing interpretations as to its symbolism. Some say the color resembles the sea and the sea resembles the sky and the sky resembles God’s holy throne thus the thread is a way of gaining the highest levels of spirituality.

The fringes, or tzitzit, in its simplest definition, remind us of God’s commandments and not to be tempted or seduced by your heart or led astray by your eyes.

Up until my husband passed away, while I was raised Jewish, I never studied Judaism and never went to Hebrew school.  We did celebrate all of the traditional holidays and belonged to a synagogue. But aside from holidays, I truly did not know much about my religion.

Consequently, when we had our daughters, my husband and I both agreed they would attend Hebrew school. He was raised in a much stricter religious home. I’ve always felt that children should have faith regardless of their religion.  And, I wanted them to have a better understanding of their religion than I did. Whether my daughters embrace their religion or back away is entirely their choice.

Because of Hebrew school, we joined a synagogue. As a result, my exposure was more frequent.

One aspect of our faith is the daily minyan prayers, held twice a day at our synagogue. Minyan requires a quorum of ten adult Jews for certain components of the regular service. One of these is saying Kaddish, a prayer said by mourners.

When I would pick up my daughter from Hebrew school, we would attend the evening service as they had a difficult time getting 10 adult Jews. Girls that have been bat mitzvah count as an adult. I explained to my daughter that one day I would need to recite this prayer for my parents and I wanted to make certain I could recite the Mourner’s Kaddish.

We went for years until my daughter was driving and we stopped going. Never in my wildest dreams would I have thought that I would be reciting Kaddish for my husband. But here I was, eight days past his death, and ready to say Kaddish for the next thirty days.

During those 30 days, I went from citing the prayers, but still in a state of shock, to actually connecting to the morning prayers. There were passages that resonated so deeply within me that I would often refer back to them. Eventually, I found myself really leaning on my faith to get me through some of my darkest days. As one of the passages states “Favor me and I am a mountain of strength. Hide your face, Adonai, and I am terrified.” To me, I needed my faith meant so I was not spending every day questioning the whys or the hows. Leaning on God provided the strength I needed at the time to overcome a situation I did not think I could.

When the 30 days of mourning were up, I did not truly feel finished. How was I supposed to move forward after only 30 days? So I continued to attend services, not only to make certain another congregant had the required number of Jewish adults in attendance so they could recite the Mourner’s Kaddish, but also for myself. As time progressed, I did find myself getting stronger and stronger. Putting my faith in God allowed me to transform my mourning into living.

When my 88-year-old father passed away a few years later, I once again found myself going to daily minyan. This time, it was every day for 11 months. If I was out of town or unable to make it to services, I still said Kaddish for my father.

HaveUHeard that the amount of time you say Kaddish for a relative that has passed depends on the relationship. It was explained to me that while grief is not less or more intense for a child vs a parent vs a sibling vs a spouse. Rather, parents who give birth to children, raise them, and educate and transmit Jewish and human values to them, are asked to mourn for the longest period of time (11 months versus 30 days). Furthermore, because I am an individual first before I had a sibling or a husband or a child, my mourning period would be shorter. I was never an individual as a child myself so that is the explanation as to why a person would mourn longer after a parent passes.

During the pandemic, services are virtual which makes mourning for someone who passed a little complicated. I did attend virtually and, although I still have a strong sense of faith, it is not the same feeling.

But the one constant is that through my experience, that thread of blue has renewed my sense of spirituality. And I know that on the days that are difficult, because loss does ebb and flow, I always have my faith.