Why I Am Pro Choice 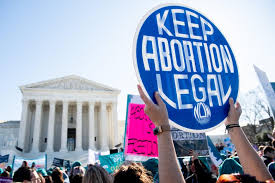 This week has been upsetting with news of the leaked brief from the Supreme Court of Justices regarding Roe vs. Wade. I am unabashedly pro-choice. My position dates back to 1931.

Abortions Date Back Long Ago

The year was 1931. A family member found herself pregnant. It was the time of the Great Depression. This person was ashamed and mortified to find herself pregnant with a third child. They did not have the money to feed a fifth family member. And they had lost their business because of the depression. With abortions being illegal, many women went to secret places for an abortion. This relative was given a pill to take. Call it ignorance, naivety, or desperation, she took the pill, hoping to abort the fetus.

Only she did not end up having a complete abortion. 8 months later, she had her third child. This child is also a family member.

The Results of Taking this Pill

Women looking to end a pregnancy had nowhere to turn. But this story gets more complicated. It is believed that this relative was carrying twins. The surviving fetus absorbed some of the tissue and was born with two uteruses and four ovaries. This resulted in extremely heavy monthly periods that would last well over 10 days. Remember, she had two uteruses, so when not pregnant, she bled profusely, having both shedding their lining.

A Lifetime of Health Effects

This story gets even more complicated. She did not always know when she was pregnant because she always experienced bleeding. At 28 yrs. old, she was already a mom to a three-and-a-half-year-old and one-and-a-half-year-old. She was not trying to get pregnant. They were using contraception at the time. After a car accident with her husband, they were taken to a hospital. During the examination, she learned she was five months pregnant. Why did she not know this? Because she still had a period.

The exam revealed multiple fetuses, including some that may have been lost due to the accident. But she would go on to carry identical twins.

Where Does This Lead Me

My point is that my family has experienced the results of what happens when abortions are illegal. It does not mean they are not performed. But there are many risks when women have to go to secret places to obtain an abortion. In the above case, it led to a lifetime of health issues.  I am grateful that for most of my life, abortions have been legal. So this startling news leaves me worried for my daughters, nieces, great-nieces, and future generations.  I 100% respect other women’s decisions, including many women I know.

Living in Florida, I have already seen the restrictive abortion laws they are passing. Did they anticipate getting to where we currently are? Possibly. I don’t know, but the timing of all these states having trigger laws in place or already passing some of the most restrictive and cruel abortion laws seems rather suspect.

It is difficult to fathom that in 2022 we are still having this discussion. Worse is that women having any say over their reproductive rights is being challenged by men. It infuriates me to my very core.

Are You Really Pro-Life?

Since every person is entitled to their own opinion, I don’t have an issue with a person being against abortion. Don’t have one. But many of the individuals I know that are pro-life are also the same ones that fight for the right to bear arms and fight to not follow some of the scientific protocols we’ve all experienced during the last five years.

Being from Parkland, Florida, home to the worse high school mass shooting, I find it unconscionable that we cannot pass nationwide gun reforms. In fact, in my very state, which also saw 49 people killed at a gay bar, we have a governor that wants to pass constitutional carry legislation that allows people to carry firearms without a government permit.

How is that pro-life? If we cannot pass common-sense gun laws that protect innocent children, why are we passing anti-abortion laws?

What about affordable healthcare, access to contraceptives, child care availability, and wage discrimination? These go hand-in-hand with protecting and supporting women and children.   It is the antithesis of pro-life.

Following Science & Religion When It Supports A Narrative

Using science to support views only when it speaks to a narrative you believe is hypocritical.

Case in point: We all witnessed the backlash as it applied to the science of wearing masks during the pandemic. Many claimed it infringed on their first amendment rights. Yet here we are with the possibility and probability that Roe v Wade will be overturned. The Fourteenth Amendment prohibits states from making laws that infringe upon the personal autonomy protections provided for in the first thirteen amendments. Before the Fourteenth Amendment, a state could make laws that violated freedom of speech, religion, etc.

Furthermore, most that are for overturning Roe v Wade use Christian teachings that state that life begins at conception. As a Jewish woman, our Torah and Jewish law expressly permits abortion and has always prioritized the health and safety of the woman over the potential for life within her. The First Amendment says that “Congress shall make no law respecting an establishment of religion, or prohibiting the free exercise thereof, or abridging the freedom of speech, or of the press, or the right of the people peaceably to assemble, and to petition the Government for a redress of grievances.”

Like millions of pro-choice people across the country, I cannot stay on the sidelines. After the mass shooting in my hometown, I did attend the March for our Lives rally in Washington, D.C., with my daughters, who had graduated from that high school. 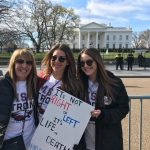 It is important to me to set an example for my daughters. This includes voting in every election. As women, we owe it to ourselves to vote. To support candidates that align with our views. And to call or email congressional representatives and voice your opinion. We may not win the battle, but we cannot give up our fight.